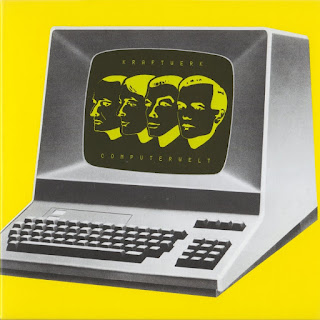 Today's album under the microscope is "Computer World" by Kraftwerk. As soon as Gary Numan mentioned Kraftwerk as a big influence I went out and bought "The Man Machine" (I had heard "Neon Lights" as the track was featured in an interview Numan had done with Simon Bates on Radio 1), that album blew me away and then bought "Autobahn" (I remember hearing the single version of "Autobahn" a few years earlier when it got into the UK singles chart, in 1975 and thought it was amazing), "Trans Europe Express" and "Radio-Activity".

From 1978 nothing new had appeared from Kraftwerk and I thought they must have called it a day, when out of the blue in an edition of the N.M.E music paper, in 1981, details appeared about a new single "Pocket Calculator" and a new album "Computer World". To say I was delighted was an understatement, I couldn't wait to hear the new material.

In the week the album was released Mark Radcliffe on his radio show, probably on Piccadilly Radio, in Manchester, he played tracks from the album and I was amazed, nothing like anything I had heard before, even more amazing was the fact they were singing about Home Computers, Online dating etc, now at that time there wasn't really any home computers as such, Kraftwerk were ahead of the game!

The band did a tour to promote this album and I attended my first Kraftwerk concert on June 15th 1981 at the Manchester Free Trade Hall, I was in row C to the left, right beneath where Ralf Hutter was positioned, the concert was brilliant, they transported their whole recording studio over from Dusseldorf as their stage set up!!

You have probably guessed from my memories posted here, this was an exciting time for me and for my love of electronic music.
Our track recommendations for this album are, "Pocket Calculator", "Computer World", "Computer Love" (my favourite track on the album) and "Home Computer". A brilliant album that doesn't disappoint.

The album is available from Amazon here
Posted by White Lion Radio Podcasts at 09:07