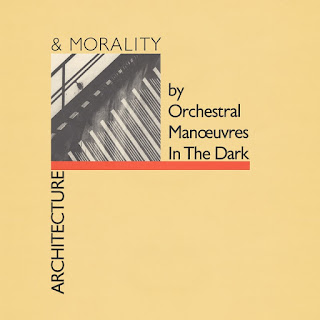 Today's album under the microscope, is "Architecture & Morality" by OMD, arguably their finest ever album, although I have to say their new album "The Punishment Of Luxury" and previous album, "English Electric" would definitely give it a run for it's money. I remember going to see the band live at the Manchester Apollo on the A+M tour, I think this was the last tour their tape machine, Winston, graced the stage, he didn't behave himself, as Andy McCluskey announced that "this next track is called "The New Stone Age", the tape machine played the intro of "Georgia"!! OMD are the band I have seen most live and they always put on a good show and are one of those rare bands that connects so well with it's fan base.

The album was then released in November 1981, to great critical acclaim, and it made number 3 in the UK album chart. Another single "Joan Of Arc (Maid Of Orleans)" was released in early 1982, which reached number 4 in the UK singles and made number 1 in both Holland and Germany, it is a track that features in most concerts they play and is loved by their fans, including me, because of the rousing drum patterns in the song, superb live!

They did release a 4th single "She's Leaving" in some parts of Europe but not in the UK.
Our track recommendations for this album are, "She's Leaving", "Souvenir" and "Joan Of Arc", "She's Leaving", "Joan Of Arc (Maid Of Orleans)", "The Beginning And The End" and "Sealand", this album features no less than 6 tracks that all got the maximum score of a 3. "The New Stone Age" is the only song that got a zero rating, i've never liked the track, and it seems totally out of place on this album.

A wonderful album that is always a pleasure to listen too.

The album is available from Amazon for under £6 here
Posted by White Lion Radio Podcasts at 09:12