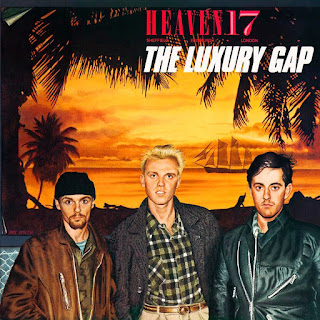 Today's album under the microscope is "The Luxury Gap" by Heaven 17, a band I have admired for a long time, especially as a live outfit, they are a brilliant band live. Their output over the years has been disappointing, aside from their debut album "Penthouse & Pavement" and of course "The Luxury Gap" their albums have been very poor. Certainly "The Luxury Gap" is the essential Heaven 17 album. This was a superbly produced album with an orchestra, it cost a small fortune to make, so it was a good job it was a successful album!


The album was released in April 1983, some 5 months after the first single from the album "Let Me Go" was released, I bought it on 12 inch vinyl and still have it, that single, for me is their finest piece of work, that bassline......"The Luxury Gap" went on to sell 300,000 copies and made number 4 in the UK Album chart.

In all 5 singles were released from the album, including "We Live So Fast", which was released in the USA only, "Let Me Go", amazingly only made number 41 in the UK Singles chart, "Temptation" made number 2, "Come Live With Me" made number 5 and "Crushed By The Wheels Of Industry", made number 17.

"The Luxury Gap" is rightly regarded as a classic, it is a quality album and stood the test of time, and from interviews I have seen of Martyn & Glenn from the band they are a couple of warm hearted, friendly blokes.

Our track recommendations for this album are, "Let Me Go", "Come Live With Me" and "Temptation". All the tracks scored a 2 or a 3 except "Crushed By The Wheels Of Industry", which I loathe, it grates me everytime I hear it, for me should have been a B side and not on the album.

I was lucky enough to find the 3 disc deluxe edition, about a year or so ago, at HMV for £9.99, a bargain, if you can find that box set, definitely go for it.

This is the album that is as good as The Human League's "Dare" album and not the debut "Penthouse & Pavement", in my book.

The album is available from Amazon here
Posted by White Lion Radio Podcasts at 09:22