To rate the albums we rate each track on the album as either 3 (Outstanding), 2 (Good), 1 (ok) and 0 (Hate it). Those points are totalled up and then divided by the maximum points the album could get (EG 10 tracks would equal 30 points, 10 x 3). Then times the figure by 100 and that gives you your percentage rating.


This is a very good indicator of how you rate an album. 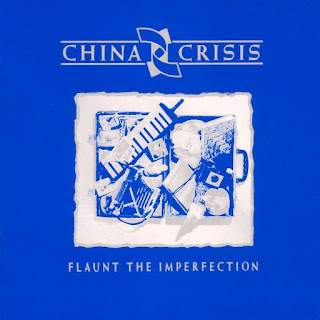 Today's album under the microscope is "Flaunt The Imperfection", by China Crisis. This was the bands 3rd album, and was released in 1985. It was produced by Walter Becker and marked a real change in the bands sound. China Crisis have always been underrated but when you look at their back catalogue they have released some stunning songs, such as, "Christian, "Wishful Thinking", "Black Man Ray", King In A Catholic Style (both of which appear on "Flaunt The Imperfection"), "Tragedy & Mystery", "Arizona Sky" and "Papua", just to name a few.

This was their most successful album, reaching number 9 in the UK Album chart and recently received the Deluxe Edition treatment along with their albums "Working With Fire & Steel" and "Difficult Shapes & Passive Rhythms", all of which are definitely worth getting.

I have always had a soft spot for China Crisis and it was pleasing to see the band release a critically acclaimed new album in 2015 called "Autumn In The Neighbourhood", another album worth investigating.

Back to "Flaunt The Imperfection", there were 4 singles released off this album "Black Man Ray", "King In A Catholic Style", "You Did Cut Me" and "The Highest High", the first two making the Top 20 in the UK Singles chart.

Our track recommendations for this album are, "Black Man Ray", "King In A Catholic Stle", "Blue Sea" and "Bigger The Punch I'm Feeling". There is just one track I dislike on the album and that is the track "The World Spins And I'm Part Of It".

If you haven't come across this band before do check them out, you just might be surprised.

The album is available from Amazon here
Posted by White Lion Radio Podcasts at 09:01