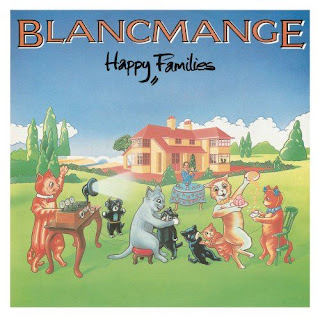 Today's album under the microscope is "Happy Families" by Blancmange. Now Blancmange got my attention through the track "Sad Day", which was an istrumental track that was on the Some Bizarre" compilation that was released in 1981. The album featured bands that were unknown at that point, including, Depeche Mode, Soft Cell and The The. I love the track "Sad Day" and still regard it as one of the best synth based intrumentals that has ever been released.

Purely on the fondness I had for "Sad Day" I bought the 12 inch double A side single "God's Kitchen" and "I've Seen The Word", which was released in 1982. I was n't keen on "God's Kitchen" (I still don't like it!) but "I've Seen The Word" I thought, was an awesome track, and as soon as the album "Happy Families" was released I bought a vinyl copy of it. It is a good, solid album, with some wonderful tracks on it. A month after the album was released they released the single "Living On The Ceiling", the rest as they say, is history, an essential track for any 80s compilation.

They released 4 singles in all from "Happy Families", the double A side mentioned above, "Feel Me" (A brilliant but bonkers track!), ""Living On The Ceiling", of course, and a re-recorded version of "Waves", I have never understood why they re-recorded it with an orchestra, the original album version is far superior.

Our track recommendations for this album are, "Living On The Ceiling", "I've Seen The Word", the new album version of "Sad Day" and the original album version of "Waves". The only track I don't like is "God's Kitchen". It is an album that has actually aged quite well.

The album is available as a 3CD Deluxe Edition from Amazon here
Posted by White Lion Radio Podcasts at 08:41