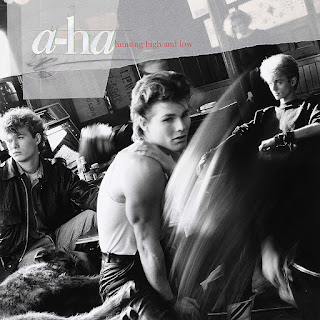 Today's album under the microscope is "Hunting High And Low", the debut album by A-Ha, which was released in June 1985.

Without a doubt the video created for the single "Take On Me" is what made this album a success, if you haven't seen it, check it out on YouTube, it is fantastic. What is surprising is that it took until the 3rd re-release before it was a hit!

The reason I bought the album was because of the track "The Sun Always Shines On TV", a powerhouse synthpop/new wave track, to this day the track still has a certain something special, a superbly structured track. It is a wonderful album and the 4 disc deluxe edition released in 2015, is a must have, plenty of remixes, alternative versions, and demo's etc, one of the few box sets that really does deliver and provide value for money.

The album featured 5 singles "Take On Me", "The Sun Always Shines On TV", Train Of Thought" and the title track of the album "Hunting High And Low", all of which achieved chart success in the UK singles chart and charts around Europe."Love Is Reason" was also released as a single, but only in Norway.

What I like about this album is it is quite varied and certainly sees the band on fine form, their best album ever. as with quite a few albums I am reviewing and rating this has stood the test of time, 32 years old and still an essential listen.

Our track recommendations for this album are, "Take On Me", "The Sun Always Shines On TV", "Hunting High And Low" and "Love Is Reason". There are no tracks I dislike and only one track (I Dream Myself Alive) earning a score of 1 point.

The album is available for under £5 from Amazon here
Posted by White Lion Radio Podcasts at 10:16