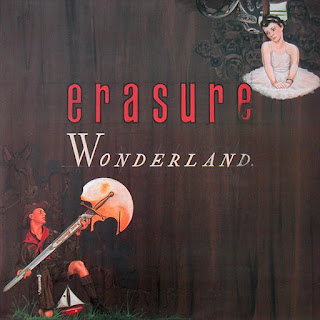 Today's album under the microscope is "Wonderland", the debut album by Erasure. Now a lot of people think that "The Circus" was Erasure's first album, yes it was their breakthrough album on the back of the success of the single "Sometimes", but Before that we had this little gem, which was released in June 1986. It barely dented the UK album chart, reaching number 71, the album included 3 singles "Who Needs Love Like That", "Heavenly Action" and "Oh L'Amour", none of which troubled the UK singles chart.

I bought this album when it first came out, as I was a big fan of the work of Vince Clarke, and I still am. This album has some stunning tracks on it and certainly deserved better chart success and it is puzzling to me why it failed so badly. Personally I don't think the album "The Circus" is a patch on this album, I rarely play "The Circus", however, "Wonderland" gets played on a regular basis. I think the one problem with this album, is they chose the wrong tracks to be singles, with the exception of "Oh L'Amour".

If you like infectious Synthpop, like me, this album is essential to have in your collection and in my opinion, it certainly falls into the "Classic Albums" category.

Our track recommendations for this album are, "Reunion" (definitely should have been a single), "Cry So Easy" (another potential single)", "Oh L'Amour" and "My Heart ....So Blue".

There are no tracks I dislike as such, but the tracks "Push Me Shove Me", "Say What" and "Pistol" only scored 1 point each.

The album is available as a 3 disc box set from Amazon here
Posted by White Lion Radio Podcasts at 11:50