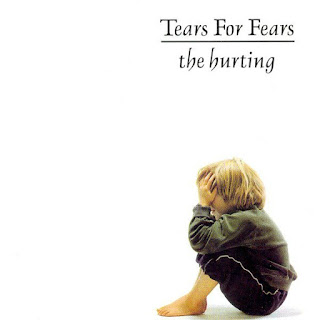 Today's album under the microscope, is "The Hurting" by Tears For Fears, which was released in March 1983, having bought the double 7 inch of "Mad World (to this day I can hear no difference between the standard 7 inch version of "Mad World" and the World Remix of "Mad World"!! Maybe someone can enlighten me!), I didn't hesitate to buy the album, my reaction to it was there were some brilliant tracks on the album but the quality fell short towards the end of it and I still have that
opinion today, "The Prisoner" and "Start Of The Breakdown" felt somewhat out of place.

The debut single was the track "Suffer The Children", released in November 1981, a remixed version appears on the album. I just love this track and it is easy to see why they got a record deal on the back of this track and "Pale Shelter". Amazingly it only reached number 52 in the UK Singles chart, it definitely deserved better! The original version of "Pale Shelter was released in March 1982 but failed to enter the UK Singles chart and things were looking bleak for the duo.

Then in September 1982 the breakthrough came, in the shape of the single "Mad World", a track I still rate as one of my all time favourite singles, it reached Number 3 on the UK Singles chart, the album quickly followed, and that reached number 1 on the UK Albums chart.

The album included a re-recorded/remixed version of the track "Pale Shelter", which they released as a single, another track I rate as one of my all time favourite singles. It reached number 5 in the UK Singles chart. The final single released off the album was "Change" another brilliant track and a great choice for a single, it was released in January 1983 and reached number 4 in the UK Singles chart.
Reflecting on the album now I think it is a mixed bag, probably because I hate the saxophone!, so tracks like "Ideas As Opiates" and "Memories Fade" don't stand a chance with me, on the flipside there are some truly excellent tracks, in addition to the singles, the tracks, "The Hurting" and "Watch Me Bleed" are very impressive.

Our track recommendations for this album, are, "Mad World", "Pale Shelter", "Suffer The Children", "Memories Fade" and "Change". There are 3 tracks I totally dislike and they are "Ideas As Opiates", "The Prisoner" and "Start Of The Breakdown".

The best bet is to make a compilation of the best tracks from this album along with the stand out tracks from the album "Songs From The Big Chair", do that and you have an album that would be perfect.

The album is available from Amazon here
Posted by White Lion Radio Podcasts at 08:01