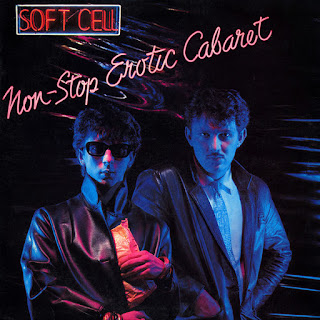 I'm sure I don't need to tell you, that their breakthrough came with their cover version of "Tainted Love", I bought the 12 inch single and loved the way they mixed "Where Did Our Love Go" into "Tainted Love", the B Side, which was a dub version I never liked and still don't, listening to it, it makes me feel queasy!!!

"Tainted Love" is one of THE classic 80s tracks. It was released in the summer of 1981 and hit the top spot in the UK Singles chart.

The album was released in November 1981 as was the single "Bedsitter", my favourite Soft Cell song, pure brilliance, I also like the B Side "Facility Girls", again I bought the 12 inch single which is fantastic, with both tracks receiving the extended treatment. "Bedsitter" 12 Inch is my 2nd favourite 12 inch single of all time. Once again this did well in the charts and reached number 4 in the UK Singles Chart.

The final single released off the album, is probably the greatest ever synth ballad, "Say Hello Wave Goodbye", released in January 1982, again I went for the 12 inch version and to this day I am undecided about the 12 Inch Mix, but that takes nothing away from the fact that this is a superb track, which peaked at number 3 in the UK Singles Chart.

Back to the album, they definitely picked the best tracks as single releases, however, some of the other tracks haven't aged that well and I do find it a difficult album to listen too these days. I certainly liked it more in the 80s than I do now.

Our track recommendations for this album, are, not surprisingly, "Bedsitter", "Tainted Love" and "Say Hello Wave Goodbye", with a special mention for the track "Sex Dwarf", if there was one word to sum up that track, it would be "fun". There are 2 tracks on this album that I don't like, never have, and they are "Frustration" and "Seedy Films".

If you grew up in the 80s I'm sure you will have this album in your collection.

The album is available from Amazon with bonus tracks for under £6 here
Posted by White Lion Radio Podcasts at 09:27