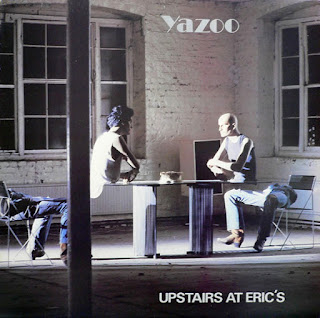 Today's album under the microscope, is "Upstairs At Eric's" by Yazoo. I was quite disappointed when Vince Clarke left Depeche Mode after the "Speak & Spell" album and was certainly intrigued, by what he intended to do next.

He formed Yazoo with Alison Moyet and their first single was "Only You" released in March 1982 and I bought it without hesitation and what a fantastic song it was. He apparently offered the track to Depeche Mode when he left the group as a gift! I'm so glad that didn't happen, it certainly showed how good he was/is at writing well crafted pop tunes.

I couldn't wait to hear the album, at this time in my life I was living in a grubby bedsit and the only real possession I had was my record player, the album and the singles were played to death on it! What an album and a very important album for me at that time in my life.

The album was released in August 1982 and reached Number 2 in the UK Albums Chart, it deserved to get to number 1.

A third single was released off the album, "Situation", which was released in July, just before the album came out, but was only available in the United States and Canada, it soon became a popular import, I got the 12 Inch from HMV in Manchester, the money that place made out of me!

This album provided a big part of the soundtrack of my life, during the 80s and I was so disappointed that they were to make only one more album, I also love "You And Me Both", another superb album with a collection of wonderful Synthpop tunes.

To this day I consider Vince Clarke to be one of the greatest songwriters this country has ever seen, he is a genius.

Our track recommendations for this album, are, "Don't Go", "Only You", "Too Pieces", "Bad Connection" and "Goodbye 70s". There is only one track I dislike and that is the awful "I Before E Except After C", why that was included on the album I will never know, I think Vince was playing a practical joke on us!

An album that deserves the right to be called a "Classic", another timeless masterpiece, surely you have this album in your collection??

The album is available from Amazon for just over £5 here
Posted by White Lion Radio Podcasts at 10:13