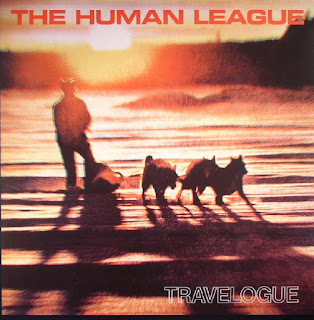 Today's album under the microscope, is "Travelogue" by The Human League, one of my favourite 80s albums.This album featured Mark I of The Human League when Martyn Ware & Ian Craig Marsh were in the band, it was the bands 2nd LP, the first being "Reproduction", whilst that had some obvious highlights, such as, "Empire State Human", "Blind Youth" and "The Path Of Least Resistance", for me "Travelogue" was on another level. It was like "Metamatic" by John Foxx, unlike anything I had heard before, produced with Synthesizers and Drum Machines, years ahead of it's time.

A girl I worked with in 1980 kept banging on about The Human League and borrowed me the original "Being Boiled" 7 Inch, now considered a collectors item, to be honest I didn't really know what to make of it, then they released the "Holiday '80 EP, which was a double 7 inch single, in February 1980 and I bought it. This included a re-recorded version of their debut single "Being Boiled", even this new version didn't appeal to me, however, I loved the tracks "Marianne" and "Dancevision". The EP only received moderate success, peaking at Number 56 in the UK Singles chart.

2 months later "Travelogue" was released, it exceeded my expectations by a long way and it was on heavy rotation, much to the annoyance of my parents!! Not long after this the band went their seperate ways, with Phil Oakey continuing under the name, The Human League, a bit strange as Martyn Ware formed the band, effectively he was sacked from his own band along with Ian Craig Marsh, of course they went on to have success, as Heaven 17.

The album reached number 16 on the UK Albums chart in 1980, no actual singles were released from the album, however, the brilliant "Only After Dark" was included as a free 7 inch single with the re-release of "Empire State Human".

Another interesting fact about this album, which I only learnt today, it was co-produced by Richard Mainwaring, who then went on to produce the OMD album "Architecture & Morality"!
This is one of my most played albums over the last 40 years or so, never grow tired of listening to it and it still sounds futuristic today, an amazing piece of work.

Our track recommendations for this album, are, "The Black Hit Of Space", "WXJL Tonight (My favourite track off the album)", "Only After Dark" and "The Touchables". As you would expect there are no tracks I dislike on this masterpiece.

Interestingly, this is also one of my brother's, favourite albums of all time.

You should definitely own a copy of this album!

The album is available, with a wealth of bonus tracks for under £6 from Amazon here
Posted by White Lion Radio Podcasts at 11:51