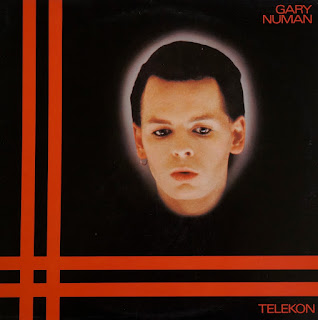 Today's album under the microscope is "Telekon" by Gary Numan, which was released in 1980 and may well be my favourite album of all time, but you will have to wait and see, until I put online the full list of 30 albums reviewed and rated.

The first concert I ever attended was a "Teletour" concert to promote the album "Telekon". I went to both shows at the Manchester Apollo on September 8th & 9th 1980 and was blown away by the stage set-up. He had 2 massive towers that 2 of the keyboard players were housed, it was, and still is one of the best stage designs I have ever seen at a concert.

Prior to the album being released, Numan released the singles "We Are Glass" and "I Die:You Die", neither of which appeared on the album, "We Are Glass" I rate as one of Numan's best ever tracks. "Telekon" was released on September 5th 1980 and as usual I popped out of work during my morning break to buy the album from HMV in Manchester.

As soon as I got home I put the record on and loved it, to think he could produce a third album of such quality was amazing, he was on a roll, sadly though, the next few releases were well below par.
He only actually released one track as a single from the LP and that was "This Wreckage" (the track he opened the "Teletour" shows with), surprisingly the single only reached Number 20 in the UK Singles chart.

This is an album that has quality from start to finish, which I play on a regular basis, I still think it sounds futuristic, even though it is nearly 40 years old!
Our track recommendations for this album are, "I'm An Agent (should have been a single)", "I Dream Of Wires (this was originally planned to be a single)", "This Wreckage", "Please Push No More" and "The Aircrash Bureau".

There is not a single track on this album I rate below 2, which shows how good I think this album is.

The album is available from Amazon here
Posted by White Lion Radio Podcasts at 13:14