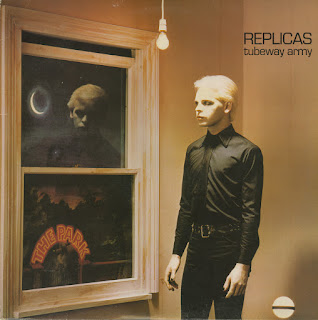 For todays classic album, we go back to 1979 and the album "Replicas" by Tubeway Army, an album that is massive in my life as it was the album that first got me into electronic music. Seeing Gary Numan (Tubeway Army) performing "Are Friends Electric?" on Top Of The Pops in May 1979 blew me away, I recall at the time, I thought I was watching something alien, new sounds, new instruments, deadpan vocals, it grabbed me immediately, the rest, as they say, is history. Surprisingly though "Replicas" isn't a totally electronic album, it features a lot of guitars, but it was the way he made use of synthesizers that was pure genius, a unique album. The single "Are Friends Electric?" took several weeks to climb the UK singles chart before it reached number 1, where it stayed for 4 weeks. The album rocketed to number one in the UK album chart in July 1979.

The album features just 2 singles, "Are Friends Electric?" and "Down In The Park", the latter was the first single released off the album but wasn't a hit.

Our track recommendations are the 2 singles and "Me I Disconnect From You", "The Machman" and "You Are In My Vision". You won't be surprised to learn that there are no tracks that I dislike, an album I regard as a classic and it has aged really well.

The album is available from Amazon here
Posted by White Lion Radio Podcasts at 01:37