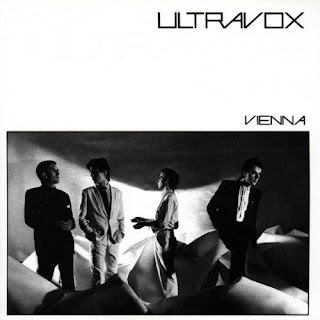 Today's album under the microscope, is "Vienna" by Ultravox, the debut album that featured Midge Ure on vocals, after he replaced the departed John Foxx. Now this album I was really looking forward to, as I did not know what to expect, I really didn't, the first single released was "Sleepwalk" (a very underrated single for me), this single has a unique place in my 7 inch vinyl single collection, it has the honour of being the most warped 7 inch single in my collection, by a long way, whenever I played it, it was like being on a rollercoaster, why I didn't take it back and get a replacement god only knows, but I don't think I have played the 7 inch much, since I bought it in 1980, for fear of damage to my record deck!

The single made number 29 in the UK singles chart.

Thankfully, the next single off the album I bought, "Passing Strangers" was in pristine condition. I always felt this was the wrong choice as a second single, they should have released "New Europeans", the fact it only made number 57 in the UK's singles chart would seem to back thoughts. Just when things were beginning to look bleak for the band, they released the title track as a single, which was a massive hit all over Europe and held the number 2 spot in the UK singles chart for 4 weeks (which might actually be a record??). It was prevented from reaching number 1 by a crap novelty record called "Shaddup Yer Face" by Joe Dolcie, one of the biggest travesties in popular music history! They made a superb video for the track as well. Ultravox were in the big time (I wonder what John Foxx made of it all?)

The final single released off the album was "All Stood Still", which also made the top 10 in the UK singles chart.

I've always loved the monochrome sleeve design for the album cover and for me it is one of my favourite album covers ever, very european, as was the music. A stunning album with quality from start to finish, I always enjoy listening to it, it still sounds ahead of it's time.

Our track recommendations for this album are, "New Europeans", "Private Lives" and "Sleepwalk" and "Vienna", I love every track on this album and the songs scored a 2 or 3.

The album is available from Amazon here
Posted by White Lion Radio Podcasts at 08:48