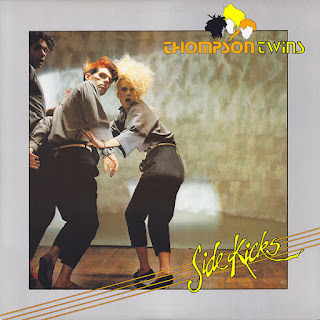 Today's album under the microscope, is "Quick Step & Side Kick" by The Thompson Twins. I first heard the album at a friends house and really liked it, so I bought the album on cassette initially, as that included a wealth of bonus tracks. I always felt this band didn't get the recognition they deserved, despite some excellent releases in the 80s.

The first single to be released off the album was the track "Lies" in October 1982 and it didn't set the world on fire as it only reached number 67 in the UK Singles Chart. Their next single "love On Your Side", provided the big breakthrough for the band in the UK, where it reached the Top Ten in the Singles chart.

The album was released in February 1983 and was a big success, reaching number 2 in the UK Albums Chart, this was followed by the release of the brilliant single "We Are Detective", again taken off the album, it reached number 7 in the UK Singles Chart. The final single released off the album was "Watching", the album version featured some vocals by Grace Jones, but these were removed from the remixed single version. It only managed to break into the Top 40, making number 33 in the UK Singles chart.

This is one of those albums I play now and again these days as I find some of the songs a bit grating, however, there was no denying this was a unique and fun album when it first came out

Our track recommendations for this album, are, "We Are Detective", "Judy Do" and "Love On Your Side". Most tracks on this album got a score of 2, however, the tracks "Kamikazi" and "All Fall Out" I just don't like at all and scored 0.

Not quite a classic 80s album for me.

The album is available as a 2CD Deluxe edition from Amazon for under £8 here
Posted by White Lion Radio Podcasts at 09:25