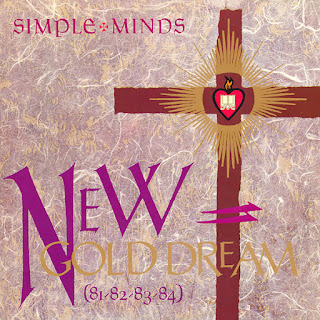 Today's album under the microscope, is "New Gold Dream 81,82,83,84)" by Simple Minds. I had already been a big fan of Simple Minds from when they released the twin albums "Sons And Fascinations" and "Sister Feelings Call" both of which I bought when they came out in September 1981. Two really impressive albums but they were eclipsed by the brilliant "New Gold Dream" album that was released a year later in 1982. I played this vinyl album to death, surprisingly though, I never really took to the first single released from the album "Promised You A Miracle", which was released in April 1982, however the second single was a perfect choice, "Glittering Prize" was released a month before the album and blew me away when I first heard it. "Promised You A miracle" reached number 13 in the UK Singles Chart, whilst "Glittering Prize" surprisingly only reached number 16.
The final single released off the album was "Someone, Somewhere In Summertime", which came out in November 1982, for me one of Simple Minds best tracks alongside "Glittering Prize", disappointingly it only reached number 36 in the UK Singles chart.

Our track recommendations for this album, are, "Someone Somewhere In Summertime", "Glittering Prize" and "New Gold Dream". No major dislikes on this album for me, however, "Promised You A Miracle" and "Hunter And The Hunted" scored 1 point each.

This is THE Simple Minds album to have in your collection, I listen to it quite a lot and consider it an essential 80s classic album.

The album is available from Amazon here
Posted by White Lion Radio Podcasts at 09:12