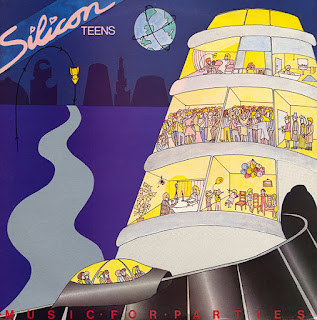 Today's album under the microscope, is a bit of a hidden gem from the 80s, it is the album "Music For Parties" by The Silicon Teens. Now this was a creation by Mute Records boss, Daniel Miller, the band was described as a 4 piece, members being, Darryl, Jacki, Paul & Diane, but they were fictional characters made up by Miller! They didn't exist!

The album "Music For Parties" was made up of rock and roll standards from the 50s and 60s given an upbeat synthpop makeover and done to great effect, also included were one or two original compositions. It was released in September 1980 and reached number 4 in the UK Indie Album chart, 3 singles were released from it, "Memphis Tennessee", "Judy In Disguise" and "Just Like Eddie", all of which were superb, with the last 2 singles reaching the Top 10 Indie Singles Chart.

I bought this when it came out as I had heard "Memphis Tennessee" on a compilation album and thought it was fun and catchy, the rest of the album was just as good, with some tracks even better than "Memphis Tennessee". I haven't heard an album like this one since 1980, it is essential to have in your collection, try listening to it without smiling and tapping your feet and singing along.....believe me it is impossible. Bonkers but brilliant!

There is so much to enjoy on this album and Our track recommendations are, "Memphis Tennessee", "Yesterday Man", "Doo-Wah-Diddy-Diddy", "Do You Love Me?", "Just Like Eddie" and "Red River Rock". There is only one track on the album I'm not keen on and that is the track "State Of Shock (Part 2)".

This album should be regarded as a national treasure, if you don't own it, treat yourself, you won't be disappointed.

The album is available from Amazon here
Posted by White Lion Radio Podcasts at 12:10