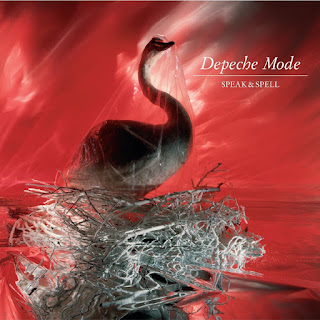 Today's album under the microscope is "Speak And Spell" by Depeche Mode. I first heard Depeche Mode on one of my many daily visits to HMV in Manchester during my lunch hour, they played "New Life" and I thought it was brilliant, catchy as hell, I bought the single that day on 7 inch and 12 inch (12 inch was disappointing as it was hardly an extended version, just a few seconds of a drum intro added). They then released "Just Can't Get Enough" as a single on September 7th 1981 (I remember buying it the day it came out as It was a week before my brothers birthday) I bought both the 7 and 12 inch versions.

Both these singles, I have always felt, are fantastic examples of classic synthpop, what a genius Vince Clarke is, he wrote most of the "Speak And Spell" album, the man knows how to craft a melodic tune!

Amazingly I stumbled across the album in HMV (again!) and had no idea they had released it, I didn't think twice, I purchased a copy (on vinyl of course) straight away and couldn't wait to get home to play it. I remember listening to it and thought this is the best thing I have ever heard, virtually every track was a synthpop gem, I loved it and still do, it's another classic album I have on heavy rotation.

Our track recommendations for this album are, "Just Can't Get Enough", "New Life", "Puppets", "What's Your Name" and "Photographic". Another brilliant album that doesn't disappoint and that has also aged very well, thanks in no small part, to the writing skills of Vince Clarke.
No tracks are a disappointment on this album

The album is available from Amazon here
Posted by White Lion Radio Podcasts at 12:45