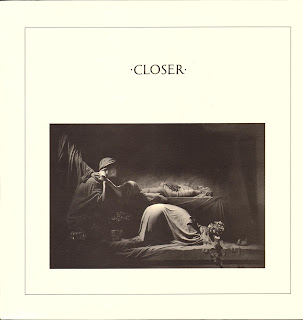 Today's album under the microscope is "Closer" by Joy Division, an album I rate as one of my all time favourite albums.

I discovered Joy Division, via a local newspaper in Manchester, where I am from, they had an article about the lead singer of Manchester band Joy Division had taken his own life. I felt compelled to find out about their music and bought their debut album "Unknown Pleasures" without actually listening to any of their music!!

That was the start of my passion for Joy Division and of course New Order, as they subsequently became.

I bought the single "Love Will Tear Us Apart", which came out in June 1980, around that time I bumped into Anthony H Wilson (Factory Records) in Manchester, and got chatting to him about the new single and the band in general. the passion and belief he had in Joy Division was quite staggering and the chat we had, has stayed with me ever since. "Love Will Tear Us Apart" has become my favourite single of all time.

"Closer" was released in July 1980, 2 months after the death of Ian Curtis, the album cover was amazing, it was a picture of a family tomb, which I suspect had already been designed and signed off before Ian Curtis died, so it was quite fitting in the cicumstances, as for the music, well what can I say, it is an outsanding album, and when you listen to the lyrics, Curtis was definitely reaching out to people about his personal problems and trauma, yet nobody in the band realized this, until after his death and the release of the album.

No singles were released by the record company off the album and "Love Will Tear Us Apart" wasn't included either, but that doesn't mean the quality of the album was affected, by this time the band started using synthesizers and they were put to good use on tracks like "Isolation", "Decades" and "The Eternal"

The album reached number 6 in the UK album chart.

By the way if you haven't seen the film "Control", which is about the life of Ian Curtis is superb and highly recommended.

Our track recommendations for this album are, "Isolation", "Heart And Soul" and "The Eternal" and "Decades". As you would expect there are no tracks I dislike. In a word a masterpiece.

The album is available from Amazon here
Posted by White Lion Radio Podcasts at 07:52