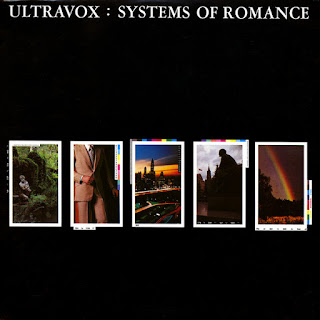 Today's album under the microscope is "Systems Of Romance" by Ultravox, that was released in September 1978. This was the 3rd and final Ultravox album that featured John Foxx on vocals. The album failed to get the commercial success it deserved and seemed to mark the end of the band, as they were dropped by their record company. They of course went on to achieve success all over the world when Midge Ure joined the band as their new vocalist.

I bought this album on the strength of hearing the track "Slow Motion" that was played on a Radio 1 interview with Gary Numan shortly after "Replicas" was released.

The album features 2 singles, "Quiet Men", and following the success of the "new Ultravox" "Slow Motion" was also released as a single and made the top 40 in the UK singles chart.

This is an essential album you should have in your music collection and, it is clearly evident, that this album had a big influence on the Tubeway Army album "Replicas". Like "Replicas", "Systems Of Romance" makes excellent use of Synthesizers and guitar.

Our track recommendations for this album are the 2 singles mentioned above, as well as, "Maximum Acceleration". There are no tracks on the album I dislike.

The album is available from Amazon here
Posted by White Lion Radio Podcasts at 09:53