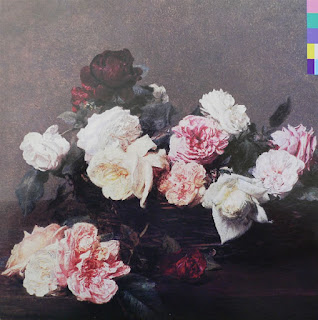 Today's album under the microscope?, well following Joy Division, we have the New Order album "Power Corruption & Lies", which was released in May 1983. This was New Order's second album, the follow-up to the disappointing debut "Movement". Like so many of their early albums the album included no singles, that said "Age Of Consent" should definitely have been a single. Of course, the album did follow the release of the best selling 12 inch single of all time "Blue Monday".

This album came out at a very low point in my life, for reasons I won't bore you to death with and I always saw this as a positive upbeat album and a line in the track "Your Silent Face", "You Caught Me At A Bad Time, Why Don't You Piss Off" resonated with me quite a lot during this period! One of Bernards best lyrics without a doubt.

The album reached number 4 in the UK album chart and for me I see this album as the first proper New Order album and what an album it is. Heavy use of synths but with the trademeark Hooky basslines and Bernards guitar, one of their most electronic albums, which is what appeals to me. It has also stood the test of time really well and is probably the most played New Order album in my collection, and I have everything they have ever released, the same applies to Joy Division.

Our track recommendations for this album are, "Age Of Consent", "Your Silent Face" and "The Village", as with Joy Division's album "Closer", there are no tracks I dislike, all tracks scored 2 or higher. Another essential album you should have in your music collection.

The album is available from Amazon here
Posted by White Lion Radio Podcasts at 10:56