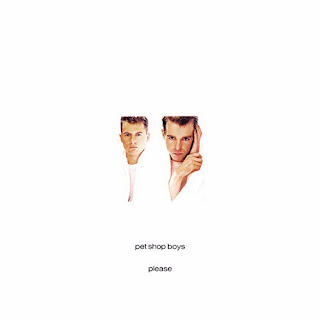 Today's album under the microscope, is "Please" by Pet Shop Boys, one of my favourite bands of all time, just don't mention the album "Electric" to me!!

I bought "Please" on release day but didn't get the chance to play it when I got home, as I was going to a party in Blackpool, for some strange reason I took the LP with me, maybe I was hoping the DJ would play it for me or I was worried someone would pinch it!!

I liked the single "West End Girls", although I thought "Love Comes Quickly" was a strange choice as a single. I bought the album having heard just those 2 singles, they were the days when you could buy an album without hearing hardly anything from it, now with the internet, music is plastered everywhere, which has taken the fun out of buying music.

The album came out in March 1986 and reached number 3 in the UK Album chart, I thought it got to number 1, it certainly should have done! The single "West End Girls" reached number 1 in the UK Singles chart, whilst the follow up "Love Comes Quickly" only made number 19.

Following the release of the album they released the track "Opportunities (Let's Make Lots Of Money)" as a single in May 1986 and that track reached number 11, the 12 Inch is brilliant as is the B Side "Was That What It Was" (a track that should have been on the album). The last single released from the album was "Suburbia", it was a new version and it made number 8 in the UK Singles chart, personally I have never been to keen on that track.

Why tracks such as, "Tonight Is Forever" and "Why Don't We Live Together" weren't singles I will never know, vastly superior to "Love Comes Quickly" and "Suburbia".

Our track recommendations for this album are, "Opportunities (Lets Make Lots Of Money)", "Why Don't We Live Together" and "Tonight Is Forever". There are no tracks I dislike on this album, with "Love Comes Quickly" being the only track to score 1 point.

I have more Pet Shop Boys CD's and Vinyl in my music collection than any other artist. "Please" is a fantastic debut album, well worth digging out from time to time to listen too.

The album is available from Amazone here
Posted by White Lion Radio Podcasts at 09:13