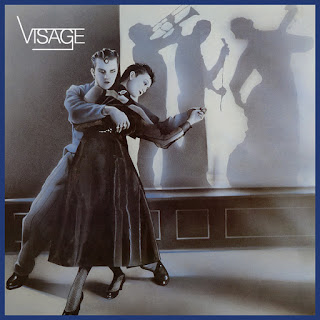 Today's album under the microscope is the self titled debut by Visage. This was in effect a synthpop/new wave super group, consisting of Midge Ure (Ultravox & The Rich Kids), Rusty Egan (The Rich Kids), Steve Strange, Billy Currie (Ultravox), Dave Formula (Magazine), John McGeoch (Magazine) and Barry Adamson (Magazine). Their debut album was released in November 1980, which included the breakthough single "Fade To Grey", which reached number 8 in the UK Singles chart. The video for the track cost just £5,000 to make! It was money well spent.

This is an album I actually bought on the recommendation of a work collegue, she lent me their first single "Tar", which I liked but wasn't totally convinced about, but as the band featured 2 members of Ultravox I bought the album and wasn't disappointed. It reached number 13 in the UK Album chart.
They released 2 further singles from the album "Mind Of A Toy" (which reached number 13 in the UK singles chart) and my favourite track "Visage", the 12 inch is brilliant (the single made number 21 in the UK singles chart).

Our track recommendations for this album are, "Visage", "Fade To Grey", "Mind Of A Toy" and "Moon Over Moscow". The only track i'm not keen on is "The Steps".

Some tracks have aged better than others in my opinion, but it is still a great album.
Our overall rating for this album is 60/100

The album is available from Amazon for under £4 here
Posted by White Lion Radio Podcasts at 10:24