Our final selection in our favourite 80s 12 Inch Vinyl Singles, next week we will be releasing a 2 part show counting down our chart for the Top 30 Vinyl 80s 12 Inch Singles.

Please not the records are not in the order of how we have featured them on our blog, so it will be a nice surprise to hear our countdown! 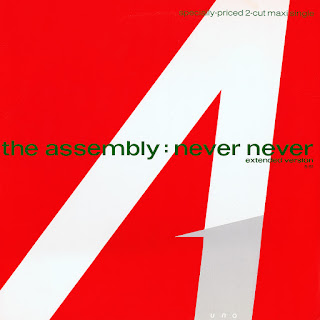 If there is one person that has a profound effect on me where music is concerned, it has to be Vince Clarke, a genius at creating catchy, melodic synthpop songs.

It is no surprise to see Vince featured with 3 tracks in this Top 30 feature, with 3 separate projects, Yazoo, Erasure and the short lived The Assembly.

The Assembly only released one single and that is the achingly beautiful “Never Never”, which features Feargal Sharkey on vocals, a perfect partnership for this particular track. Again I think this is another timeless masterpiece, still refreshing to listen to after all these years. A perfect blend of electronics and acoustic guitar, something Vince is very good at.

The single was released in October 1983 and reached number 4 in the UK Singles chart.

You can actually get a used copy of the Vinyl 12 Inch Single from Amazon for just over £4, which is a bargain, it is available here: