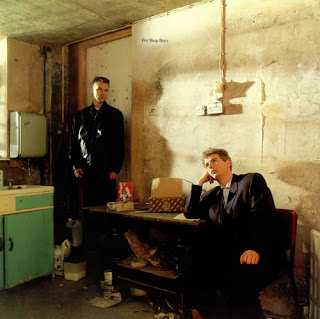 I have more vinyl,CD’s & Singles of the Pet Shop Boys than any other band, when they burst on to the scene in 1985 with the Number 1 hit “West End Girls”, I have pretty much bought everything they have released, except for the album “Electric”, which is their worst album by a country mile.

The boys came back with a bang after the disappointing chart positions for “Love Comes Quickly” (Number 19) and “Opportunities (Let’s Make Lots Of Money) (Number 11), although the fourth single off “Please”, “Suburbia” did fair better reaching number 6 in the UK Singles Chart. When they released “It’s A Sin”, it was a track they had already written when they made their first album “Please” and was the lead single off the follow-up album “Actually”. A fantastic sequence driven 12 inch version is one of their best 12 inch cuts, certainly one of my favourite 12 Inch Singles by the band.

The Disco Mix has a running time of just under 8 minutes and sees the song, in a way, split in half, with the first half mainly instrumental and the latter being the main element of the song. It was released in June 1987 and reached Number 1 for 3 weeks in the UK Singles Chart and enjoyed massive success across Europe.

The Vinyl 12 Inch Single also features the non album track “You Know Where You Went Wrong”, the same as the version on the B side of the 7 Inch Single, as well as the single version of “It’s A Sin”.

All the tracks featured on the Vinyl 12 Inch are available in the new 2CD Edition of “Actually”, that has just been re-released, as is available for Amazon here: