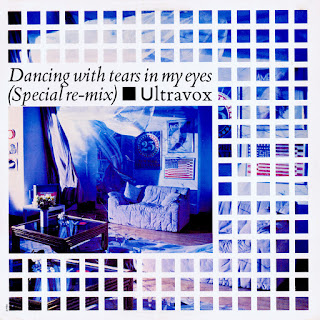 Ultravox - Dancing With Tears In My Eyes (Special Remix)

I’m a massive fan of the Midge Ure era of Ultravox, the album “Vienna” is one of my all time favourite albums, other albums have been brilliant also, including “Lament”, the album, which the single “Dancing With Tears In My Eyes” is taken.

This single had a brilliant video as well, the video is about a nuclear power plant meltdown. The music video depicts Midge Ure driving home after discovering that a nuclear explosion is imminent. The video ends with the power plant exploding, and the image of a home movie of Ure, his wife and their child, with the visual effect of a melting film.

The video did its job as the single made number 3 in the UK singles chart in 1984 and the top 10 in various other European countries.

The vinyl 12 inch is brilliant as it features a 10 minute long Special Re-Mix of the song, undoubtedly one of the defining moments in the history of Ultravox. The B Side of the 12 Inch version, featured the 7 inch version and the non album track “Building”, which is a below par track if i’m honest.

Both the 12 Inch Version and 7 Inch Version of “Dancing With Tears In My Eyes” can be found on the 2CD Edition of the album “Lament” for just over £10 from Amazon here: