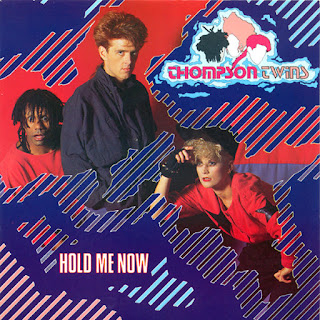 I’ve always had a soft spot for the Thompson Twins as they released some excellent records in the 80s and had quite a unique sound.

Their albums “Quick Step & Side Kick” and “Into The Gap” are outstanding, both featuring fantastic singles including “Hold Me Now”, which is off the album “Into The Gap”. It is the bands biggest selling single.

The A Side of the single featured a glorious 10 minute extended version of “Hold Me Now”, on the B Side was an Extended version of “Let Loving Start”, which is in effect a strange “Dub Version”, not the best B Side I have heard and I have probably on ever played it once!

The single was released in November 1983 and reached Number 4 in the UK Singles chart and Number 3 in the US Billboard Top 100, where it remained in the chart for 21 weeks.

The Extended version of “Hold Me Now” is featured on an excellent 2CD set of Thompson Twins 12 Inch Singles and rarities from Amazon for just under £12 here: