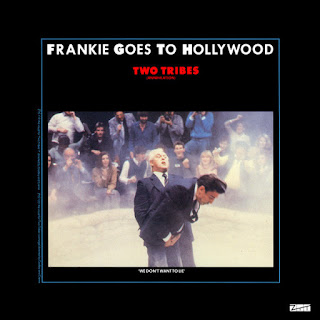 What a massive release this was in the 80s, they actually released 3 different 12 Inch Singles, I have the Annihilation 12 Inch and the Carnage 12 Inch on vinyl.

The video promo for the single was genius as it featured lookalikes of US President Regan and Russian Soviet leader  Konstantin Chernenko wrestling in a ring.

In the days when video jukeboxes were big in pubs and clubs this video got played more than any other.

The Two Tribes (Annihilation 12 Inch) is a brilliant longer version of the song, running for over 9 minutes, fantastic production by Trevor Horn, which rightly make this a classic 80s 12 Inch Single.

On the B Side are 3 tracks, a cover of “War (Hide Yourself)”, “One February Friday”, which is actually a short interview between Paul Morley and the group's three musicians, Mark O'Toole, Brian Nash and Peter Gill, over an otherwise untitled instrumental track and “Two Tribes (Surrender)”.

This 12 inch got played to death on my record deck, a record with attitude is how I would sum it up.

The single was released in June 1984, the 12 Inch releases were staggered and that helped ensure the single stayed at Number 1 in the UK Singles chart for 9 weeks! It was the longest running number-one single in the UK of the 1980s.

The 12 Inch Annihilation Version and a version of the track “War” can be found on the album “Frankie Said”, which is available for just over £5 on Amazon here: