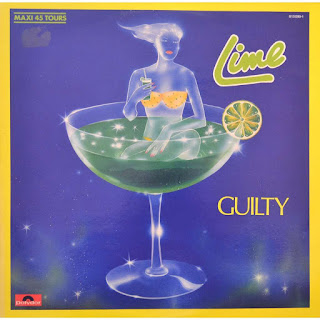 Who are Lime? I hear you asking, well they were a Canadian Hi-Energy/Disco band that were around in the 1980s and very early 90s. I came across this band when I got to know a girl living down the road from me and she had this fantastic collection of imported Hi-Energy albums and she played me the album “Lime 3”, which featured 2 stunning tracks, “Guilty” and “Angel Eyes”. The next day I went to a small record shop in Manchester called “Spin Inn Records” who specialized in imported vinyl, and I was lucky enough to find the “Lime 3” album and a vinyl copy of the 12 inch of “Guilty”. To this day I still enjoy listening to the album.

They had no success with the single “Guilty” in the UK, which to this day baffles me, it is a great track and the 12 Inch Version is brilliant.

They released around 10 or so albums and over the years I have been lucky enough to find most of them on vinyl.

I’m sure people will be surprised with the inclusion of this jewel of a track, however, when you hear it, you will not be disappointed, it is infectious and a song you will be singing, trust me, hey you might even want to add some music by Lime to your collection.

The 12 inch version is over 7 minutes long and has a shorter instrumental on the B Side, it was released in 1983.

The 12 Inch version of “Guilty” can be found on the album “Lime 3”, it also includes the stunning “Angel Eyes” as well, however, on Amazon, it will cost you over £30: