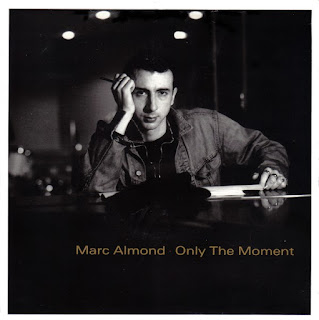 Marc Almond’s solo career has at various stages gone under the radar, however, the recent “Trials Of Eyeliner” 10CD Box Set shows there is more to Marc Almond than Soft Cell. Over the last 4 decades he has released some outstanding singles, “My Hand Over My Heart” (A serious contender for being included in this feature), “Somethings ‘Gotten Hold Of My Heart”, “Tears Run Rings”, “Stories Of Johnny”, “The Days Of Pearly Spencer” to name just a few.

Believe me, choosing a Marc Almond solo 12 Inch Vinyl single was not an easy task and I have gone for one of his lesser known tracks “Only The Moment”, a searing ballad, something almond always excels in doing.

The 12 Inch version features an extended mix which runs for 6 ½ minutes, whilst on the B Side we have an extended version of the track “She Took My Soul In Istanbul”, which has a running time of nearly over 10 ½ minutes!

The single was released in 1989 and only made number 45 in the UK Singles Chart, it definitely deserved to do much better.

You can actually pick up this Vinyl 12 Inch from Amazon for just under £7, although that is for a used copy: