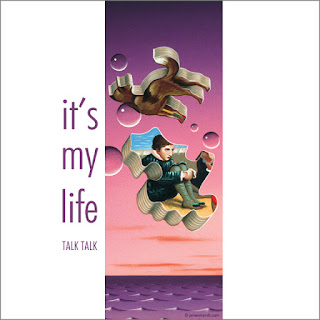 If there was one band in the 80s that didn’t get the recognition they deserved, it is Talk Talk, their first 2 album’s “The Party’s Over” and “It’s My Life” are stunning, after that, they did lose their way and pretty much ditched their synthpop roots.

The track “It’s My Life” is without doubt my favourite Talk Talk track, although, “It’s So Serious” runs it close.

The single was released in January 1984 and this was another one that didn’t do well in the charts, it only reached number 46 in the UK charts. It fared better in America where it reached number 31 in the singles chart there and also reached number 1 in the U.S Hot Dance Club Play chart.

The 12 Inch Remix of “It’s My Life”, is again a classic 80s remix, the 7 inch expanded and it has a running time of just over 6 minutes. The B Side of the 12 inch featured the album track “Does Carloline Know?” and the 7 inch version of “It’s My Life”.

The single was re-released in 1990 to promote a new compilation “Natural History – The Very Best Of Talk Talk”, though no vinyl 12 Inch was released at that time, and deservedly reached number 13 in the UK Singles Chart.

The Extended Version of “It’s My Life” can be found on the Talk Talk compilation “Asides Besides”, which has pretty much every 12 inch single on it as well as associated B Sides. You will find it on Amazon here: