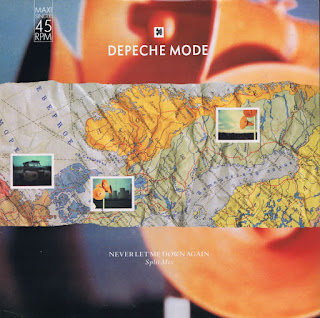 I have been an avid fan of Depeche Mode since they released their debut single “Dreaming Of Me” in 1981, sadly I have parted company with them following the release of the abysmal album “Spirit”.

I Digress........”Never Let Me Down” is from the album “Music For The Masses” and what a treat the 12 Inch Vinyl version is! The Split Mix clocks in at almost 10 minutes and is a very powerful version of the track, played loud, my god it is incredible! In addition on the flipside, we have the another version of the track, the “Aggro Mix” and a remix of the track “Pleasure Little Treasure”, one of their best B sides.

It is no wonder “Never Let Me Down Again” is such a fan favourite in the live setting, brilliant live and again this is an essential vinyl 12 inch to have in your collection, it is probably one of my most played 12 inch vinyl singles.

The track was released in August 1987 and surprisingly only reached number 22 in the UK singles chart, but did make the top 10 in several other European countries.

The “Split Mix” of “Never Let Me Down Again” is available on a remixes compilation on Amazon for under £10 here: