Niels Gordon is an electronic musician based in Sweden and his brand of electronica has a more mellow sound, drawing on such influences as early Kraftwerk (Pre 1974), Jean Michel Jarre and Klaus Schulze. 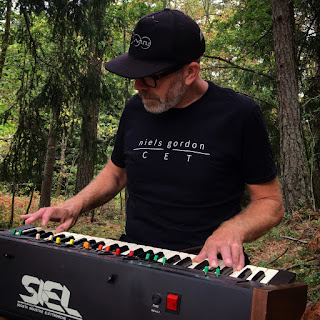 I have enjoyed following his work for a few years now, and live he is Mr Cool, nothing phases him, so it was no surprise he played support to OMD in his native land, a huge endorsement of his work.

After releasing 3 EP's, Niels is set to release his debut album "Land" on May 15th, on CD, Vinyl and as a Digital Download. 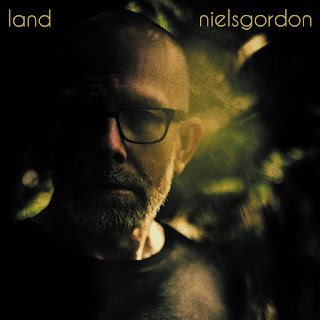 The album opens with the track "Im Park", a beautiful melody weaves its magic over a minimal rhythm and a fabulous sequenced bassline, very reminiscent of the early days of Kraftwerk, before they were famous. Niels keeps things simple, and that is his secret to live performing, he is able to recreate his work live effortlessly, check out clips on Youtube etc, he is mesmerising to watch.

The bpm is lifted on the catchy "Inner Grounds", which contains some superbly crafted sequencer melodies and bassline, overlayed with a strong main synth lead, a hypnotic beat drives the song, I rate this track as one of Niels finest recorded. Definitely influenced by Jean Michel Jarre, at least to my ears it is.

A previous version of the track "Voyage Dans La Nuit" was released in 2018 and it is pleasing to see a version included on his debut album, the rhythm section reminded me of the rhythm on The Human League's track "Gordon's Gin", the song has a more ambient vibe, with more than one melody line working in unison, again fabulous use of sequenced parts. The piano refrain at the end of the track is wonderful.

"Helio" is the shortest track on the album running at just over 3 minutes and is a sparse arrangement but does develop with some nice melodic touches, especially the keyboard/piano melody that is used to great effect, almost a soundtrack piece of music.

"Outer Grounds" is a more solem track, with great use of strings, the ambient work of John Foxx would be a good comparison, nice melodic touches again.

"Ohrnacht (Am See)" is a thing of beauty, a different version appears on his debut EP from 2016, one of the first tracks I heard by Niels. This re-working has a lovely synth chord melody and the main lead works brilliantly alongside those Kraftwerkesque chords, I also like the way the song re-invents itself by way of a refrain at the end, a nice touch.

"Woodlands" has a fantastic, strong bassline and an exceptional rhythm section (Think Kraftwerk's original version of Radio-Activity), a really powerful lead synth, what an outstanding track, my favourite track off the album.

The closing track is called "Tides" and it is a more ambient affair and is also more experimental than the rest of the tracks on the album, and was the one track that I struggled to connect with.

Niels should feel very proud of this album, he has worked very hard over the last few years, one thing you can tell from this recording is that he really enjoys what he does, and whilst there are the obvious influences across the album, he truly does have a unique sound of his own.

Start the album, turn the lights off and absorb the music of Niels Gordon, you wont be disappointed.

The album "Land" is available to pre-order on CD and as a Digital Download from Bandcamp:

The album on vinyl is available to order here: