Eric C. Powell is an electronic music artist based in the states and has been making music or been involved in music for a number of years, initially in the band Turning Keys. His new album "True", is the follow-up to his debut solo album "Back to Life", that was released in 2016. 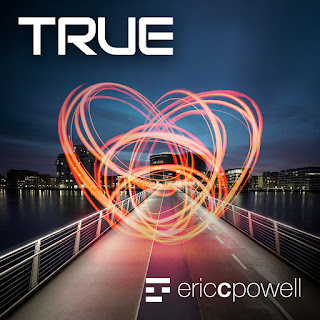 The album opens with the title track, plenty of synth hooks and melodies drive this track, it has a very full sound with everything having its place in the mix, it instantly reminded me of the music Erasure were producing in the 1990s. A very strong opening track. "Waiting for the Time" has a darker sound palette, some neat bass sounds and good use of vocoded vocals, following that we have "How I Feel", which is very much in Vince Clarke territory, excellent use of synth sounds, I like the addition of choir sounds, very effective, a mid paced track that works really well, I love how the tracks builds and develops.

Next up we have a collaboration with his wife Andrea (who he met in his Turning Keys days), upbeat and again the use of synth sounds is used in a very effective way, Andrea has a very endearing voice which works brilliantly with Eric's music, especially on this track, definitely influenced by 1990s Erasure. A well constructed song and a highlight on this album. "Sunshine" again veers towards a dance track, great bassline and I like the sparseness during the verses, which showcase a fabulous vocal by Eric, as you would expect the chorus sections are fuller and it works a treat.

Eric is a big Depeche Mode fan and he has done a wonderful version of "The Sun and the Rainfall" and he has delivered again with another Depeche Mode cover on this album, he has worked his magic on "But Not Tonight", he keeps faithful to the original and it pays off big style, he certainly knows how best to use his synthesizers and get just the right sounds out of them, a top class rendition, an obvious highlight on the album.

In 2017 Eric wrote a special instrumental track called "Noise Zombie", for the KV331, Audio Synthmaster Track Contest, the track was awarded 3rd place. As well as the expected array of synthesizer sounds, he has used Piano on the song, which cuts through the obliqueness of the track, It would certainly be perfect for a film soundtrack.

"Be With You" is a more mellow track and has a Depeche Mode influence, both in the sound and the way the track is constructed, Eric delivers on the vocal front again, lots going on in the synth department, a solid track.

Now in 2018 one of THE best electronic tracks produced, was the brilliant "Click", which was a collaboration between Eric and Darwin McD, and I am so pleased the track is on this album, Included is the ECP Emerald Vocal Remix, Andrea provides another brilliant vocal, which works in perfect harmony with Eric's vocals, it has everything you need in a perfect synthpop track, it's catchy, melodic and has a rousing chorus, he couldn't have closed the album with a better track, and Eric, Andrea and DarwinMcD deserve a lot of credit for making such a fantastic synthpop song, well done to all concerned.

Eric is a real talent, his songwriting is exceptional and he knows how to get the best out of a synth, an album that is a joy to listen to from start to finish, one every synthpop fan should have in their collection.

The album is available on CD and as a Digital Download via Bandcamp: