Maschine Brennt is the solo project of Joacim Thenander, who is from Stockholm in Sweden. His brand of electronic music draws heavily on the influence of Kraftwerk.

"The Hearing Aid" is the first album released under the Maschine Brennt name by Joacim. 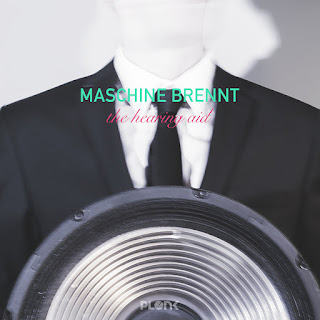 "Electric Music" is the opening track that is a solid introduction to the album, some brilliant use of sequencer patterns and the odd bit of Glitch thrown in to give us a very dark electronic track, excellent use of vocoder and vocal samples on this song too. Track 2 "Ich Bin" has a very Kraftwerk sounding intro (think "Computer World" album), quite minimalistic in sections of this track which I think works very well, a solid rhythm with melodic sequencer parts, a track I really do like. "I Want To Be Human", was released as a single in February 2016 and is a worthy inclusion on this album, it is a fantastic track, quite a moving piece of music, beautiful pad sounds and the sequencer patterns are exquisite. Fantastic vocoded vocals make this sound such a sad song, you feel the the desperation of the robot wanting to be human, a well crafted song, my favourite track on the album.

"Backspace" is next and this is also a well structered song, a solid rhythm section and driving bass-line, again fabulous use of sequenced sounds, something Joacim excels at creating. A solid pallette of sounds that will certainly appeal to diehard Kraftwerk fans. "Sistema" certainly sounds as if it could have been produced by Kraftwerk, this is a superb track, with a backdrop of dreamy sequencer sounds and punchy bass, vocoded vocals are used well to create one of the finest tracks on the album, a definte highlight.

"Mensch Oder Maschine" is a track thats shows Joacim's more melodic side, simplistic melody lines and rhythm section, a solid track. "1992" has a wonderful melodic synth intro and builds up to quite an upbeat track. A fantastic rhythm and bass section provide a solid platform for the more melodic synth elements, quite a commercial sounding track and is another highlight on the album.

"Du Bist" is the most recent single to be released off the album, again it is quite upbeat and I like the way the synths and pads are kept quite low in the mix to shift the focus on to the rhythmic elements of the track. The mood of the song is quite dark and sinister, you could imagine this track being something that could be used in a film soundtrack. It is the one track on the album I think that is a bit too long, a shorter edit I could see working very well in the context of the album. "Speak And Spell" certainly ups the BPM on this album, electronic techno, which in parts sounds a bit like Metroland, especially their recent single "Cube". I love the techno/dance vibe to the track, superb use of synth sounds and vocoder and of course Speak & Spell sound samples. It adds another dimension to the impressive album.

The album closes with the track "Elektronisk Musik", which is pure "Kling Klang", I like the drum beat on the track, in addition the sequencer sounds are brilliant (Kraftwerk's "Numbers" springs to mind). A track that would definitely fit on "Computer World" or "Techno Pop". The end section is certainly unexpected, we are treated to a wonderful ambient piece that is quite beautiful, and is an excellent way to close what is a truly an outstanding album.

I have been listening to this album quite a lot since I got it and I must say it gets better with every
listen. The songs are well constructed and Joacim excels at creating solid rhythm sections and
sequencer patterns, everything a Kraftwerk fan wants!

What more can I say, other than, it is a very impressive album with a solid set of songs. You can tell that Joacim has put a lot of effort and hard work into making this album and we, as listeners, are suitably rewarded. 9/10

The CD edition of the album, which features 4 bonus tracks is available from Razgrom Music here

The album is available as a Digital Download from Bandcamp here