Passenger A - My 12 Favourite Tracks 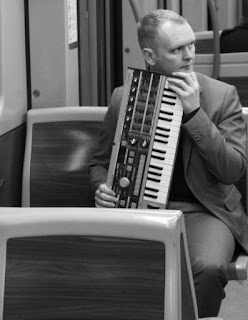 Passenger A discusses the reasons why he has selected these particular tracks.........

New Order - Bizarre Love Triangle (Extended Dance Mix)
This is just an amazing track which compels me to sing along and turn up the volume no matter where I am. It is beautiful, powerful, sweet melody, great synthesizers, and so much more. Even though Blue Monday is more danceable, this track means more to me. The so called “dub” of this track is really good too.

I only saw them live once, as support act to OMD, but I was blown away instantly by their tunes. I already loved the first version of this song on an EP they sold at the time, but when I heard the new re-recorded version on their album I almost cried because of the beauty of the intro. Their album "Lights & Offerings" is a brilliant album too, also Marsheaux did a remix for another Mirrors track, "Into The Heart”, which, for me personally, is even better than the original.

I have always been a sucker for dance music, more so, than for actual bands, or pop tunes. Maceo Plex changed attitudes and genres within Techno and House Music a lot, and not only does he get away with it, he also inspires many others. In a way I am jealous of the minimal approach of those bands and artists. “The replicant” is one of those songs that was played in “repeat mode” for weeks in my car.

Orbital - Where Is It Going?

Orbital is one of my favorite bands ever. What they do with techno and electronics is second to none. Also seeing them perform live is a must-see for anyone into electronics or just want to move to good beats and amazing sequences.‘This track is taken from their album “Wonky” and yes, they created a new #1 favourite track for me in "Where Is It Going". The live version on YouTube is the best of all, but then again, they made the album specifically to play live.

To be clear, this is the Robert Margouleff dance mix, but just a smidge longer, and is in fact the 12” version that was released in the USA. Admittedly, it was a tough choice here, as the 12” from “Everything Counts” was my first contact with the Basildon boys and it’s continuously jumping seats with "But not tonight" regularly as a favourite track, but today this won. In fact, I loved this track from the moment I heard it on the 12” of “Stripped".

After Soft Cell broke up (the 1st time), both men went their own way. Dave Ball started up “The Grid”, a kind of non-mainstream technological project with experiments and released some amazing singles, one of which was “Floatation”. I remember seeing the video clip on MTV for the first time and I was overwhelmed by the simplicity and beauty of the melody. It took me some years to find the single and during a visit to Kent in the UK, I found the vinyl 7” in mint condition. It took me even longer to finally get hold of the 12”!

Passenger S and I spent years (and a lot of money) strolling from record store to record store. It was whilst we were in Ghent, we found this 12 inch and we've been fans of “I Start Counting” ever since. The single version is more beautiful, but the 12 inch has more meaning to me, personally.

Pet Shop Boys - Being Boring
I have always had a strange relationship with Pet Shop Boys, meaning that if I liked a tune, I thoroughly loved it, but if I did not like it, I simply ignored it. “Being Boring”, marked for me, their change from the disco-ish tunes to a grown-up style which, in retrospect, gave them more number 1 hits than any band ever before. Clearly the 90’s was their era! This again is a tune, that I could play at any given time, and enjoy it, like I was hearing it for the first time. I have never been fond of any album completely, and most tracks are for me at their best if released as a single. Most album tracks are not good enough, to my personal taste.

Acts Of Madmen - The Dream

Ah, yes, New Beat. Needless to say, that when I was growing up in the 80's in Belgium, that this style had a huge impact at the time. “The Dream” has never left my record-collection and is always among my MP3-tunes in the car or on my i-Pod. Again, the melody is ever lasting. Pure bliss!

In a former life and in a former band we were once support-act to Nitzer Ebb, who were our biggest inspiration at the time. "Control I’m here" is my favorite track. The aggression in Douglas' voice, without shouting, is compelling. Next to being support-act, we also got a chance to interview them, a moment I will remember forever.

The first time that I heard this, the melody immediately struck me and it has been my favourite melody of all time ever since. The intoxicating percussion and delicious samples of bicycle chains are brilliant, the breathing, the chains even,…the whole ride… And of course, hearing the deep ‘ah!’ sample from the live-version fills me with joy every time I hear it, because I know what's coming.

Every version I have is too short for me, so luckily there is something called “repeat”! If not mistaken, Passenger S and I once made a version of this track that lasted well over 12 minutes. Bliss! The live version they play nowadays is not the same anymore, and it bugs me, that half way through they start playing the newer version, which is so boring. My number 2 track would be “Europe Endless”, and yes, in English, the lyrics are more fluent, simple as that.

Soulwax, also known as TooManyDJs is one of Belgium’s most famous names in Indie Music, who incorporate many electronics in their tunes and live performances. If you look at the artists and bands that they remixed, you will understand what I mean (Daft Punk, Hot Chip, Kylie Minoque….to name a few).

It has taken them 12 years to make a new album with new material, and it has been spinning for weeks, continuously in my car, I am glad that they went for quality instead of quantity.

Metroland have a new box set called "12 X 12" on May 26th, find out more about it on their Official Homepage: http://www.metrolandmusic.com/
Posted by White Lion Radio Podcasts at 02:32