The new Kevin Lux album "2 xuLniveK" is a much darker sounding album that his previous album "Autonomatik", with much darker theme's. 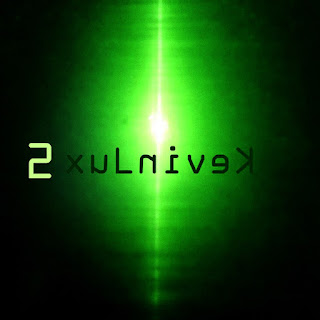 "in" introduces us to the album with it's Numanesque pad lead, a track that wouldn't be out of place on his album "The Pleasure Principle". "Dark Matter" has much deeper overtones and edges towards techno & Dance, a throbbing beat with synthetic noises and speech. "Fear The Death" is quite interesting, great use of pad sounds over a minimalistic rhythm section, in fact the track in general is quite minimal and hypnotic.

The longest track on the album is "Living In My Shadow", which is 7 1/2 minutes long, I really like the bass-line and use of sequencer parts on this track, could very easily be used as part of a film soundtrack, a good solid dance beat too, the track gradually builds up to quite a dramatic finish, one of my favourite tracks on the album.

"Usher" has a beautiful string/pad intro then a rhythm, which is not too disimilar to the one on Numan's "I Nearly Married A Human", a very atmospheric track, the vocoded vocals make the track sound quite disturbing, I mean that in a good way, it adds to the dynamics of the track. "Klywheel" is next which has some very effective voice samples set against a four to the floor beat and some excellent sequencer patterns, this is a track that has really grown on me. "Embalm" is a strange one, slowed down vocals, sounds like something from a horror film, it certainly gave me the creeps! Very minimalistic, mainly the vocals and beat with the odd synth sound and synth noise punctuating the minimal backdrop. Probably my least favourite track on the album.

"Ghosts" is quite upbeat, a very "Kraftwerk" rhythm section and I really like the synths on this one, excellent bass sounds and sequenced parts. The string sound in the last third of the song is wonderful and very effective over the main layers of the track, good use of vocoded vocals as well. This is my favourite track on the album. Next we have "False Prophets", plenty of different voice samples on this one, the song really comes to life around the 2 1/2 minute mark when the sequencers and more melodic parts kick in, very minimal drums on this song, overall it sounds quite eerie.

"Inferno" is an excellent track and a contender for best track on the album, strong rhythm and pulsing bass sounds, well constructed sequencers and the signature Pad sound from Kevin, something he uses to great effect. Probably the most commercial sounding track on the album, I really like it.

"Matter Dark", deep pad sounds and sequenced patterns are the order of the day on this track, it has an industrial feel to it, quite haunting too, the album closes with the track "Out", which like the albums opening track gives centre stage to the "Numan" synthpad lead and acts as an outro for the album.

One of the most interesting albums I have listened too and reviewed, takes a bit to get into but patience does pay off in the end, it is very different to what you would normally expect to hear from a Kevin Lux album, it would certainly sound effective, and atmospheric, listening to the album in a dark room, something I must try!

It is different as I say but worth checking out. 8/10
Posted by White Lion Radio Podcasts at 07:48