Datapop are an Electronic duo comprising of Anders Wilhelm & Mikael Larsson who are from Sweden. The band have been featured on the Plonk Music Label compilations "We Are Machine Pop" and featured on several of our "Kraftwerk"themed shows.

I have been following their progress for some time now and love their music which is inspired by Kraftwerk, but I also think French duo Air's influence can also be heard in their music. Whilst their is the obvious nod towards Kraftwerk, they have also drawn on the influence of very early Kraftwerk (Kraftwerk 1, Kraftwerk 2 & Ralf & Florian albums) as well as the Kraftwerk sound we have enjoyed over the past 30 years or so.

Datapop have released a CD version of their album "Pop" which features eleven well produced tracks, including the brilliant "Unterwegs" and "Radioklang". The CD has been released on the Russian label Razgrom Music. 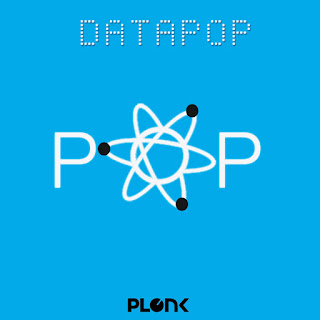 The album begins with "Human Music", which has a wonderful and simple main melody line combined with more intricate sequencer patterns, overlayed with vocoder, it sets the tone of the album perfectly. Following that we have, what in my opinion, is one of the greatest Kraftwerk influenced tracks, I have ever heard, "Unterwegs", a track I rate alongside the Metroland tracks "Enjoying The View", "Zeppelin" and "Utopia", as masterpieces created by independent electronic bands. I have raved over this track for some time and like it so much I created a "Radio Edit" of the track!

"Berlin" has a great "Bouncy" bassline and is a more uptempo track, again they keep things simple and melodic, I really like this track. "Machinepop Music" is another uplifting piece of electronica with English vocals, excellent use of sounds on this track, If I remember correctly this was one of the first songs by the band that I heard, which grabbed my attention immediately. "Hertz" is more atmospheric with another excellent bassline and perfect use of synth pads. Vocal samples are utilized very well in the song too.

"Europa-Stern" is actually a cover version of the Neon track "Eurostar" and it is a superb version and a worthy inclusion on this album. Neon, like Datapop, have had music released on the Plonk Music Label. "Electronic Music" is perhaps, one of the most "Kraftwerk" type tracks on the album, with it's vocoded vocal of the song title and driving bassline and rhythm. It's quite minimalistic in parts which works very well.

Next we have another Datapop gem, the track "Radioklang", absolutely superb this track and a nod of appreciation in the direction of Kraftwerk, the line "Radiokling and Radioklang" resonates with you immediately and is something you will be singing. The intro is so Kraftwerk, you could very easily think this was a track by Kraftwerk, it's upbeat, melodic and pure pop fun!

"Rhythmus" (Which is German for rhythm) follows, a track that makes fantastic use of electronic sounds, especially the "Zap" percussion sound, which drives the track, I also like the haunting pad/string sounds, a track that would not be out of place on Kraftwerk's "Computer World" album, some brilliant use of the vocoder and the track is more complex as well, sounds fantastic in headphones. "Komputer Music" is another Electronic Pop track that would fit perfectly on Kraftwerk's "Computer World" album, again some wonderful and interesting synth sounds are on display, I love the vocals they fit perfectly with the music, also excellent use of vocal samples, this is another superb track.......think "It's More Fun To Compute" and you will get the idea how this track sounds and develops.

The closing track on the album is "Waveforms", more minimal than the previous track, again it has a well executed bassline, which all the songs benefit from on this album. The melody parts and vocals add depth to the track and closes the album perfectly, to ensure you have a wonderful listening experience from start to finish with this album.

What a pleasure it is too hear this album on CD for the first time, it features more tracks than the digital edition, and is a comprehensive overview of the music of a very impressive band, it certainly showcases their songwriting talent.

If you are a fan of electronic music, especially the likes of Kraftwerk and Metroland you will love this album, a duo I am really looking forward to following closely, with interest, from 2018 onwards.

An album worthy of your investment 10/10

The album is available on CD from the Razgrom Music website here:

The Digital edition of the album is available on Bandcamp here: