North Wales electronic duo Future Perfect have just released the CD version of the album "After The Fall", it's an album that shows confidence and their sound, on this their 3rd album, has a harder edge to it and is dark and uplifting. 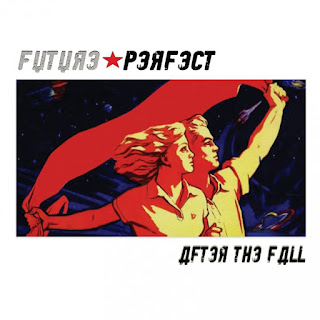 The track "Fall" is the opening track on the album and is a track that has secured a position in White Lion Radio's Top 10 tracks of 2015. It's a brilliant track and we love the use of the Korg M1 on this track, choir sounds that give the track a more haunting feel and deeper sound. One of Future Perfects best ever tracks. "Dangerous Desires" also sees the band on fine form, Rebecca's vocals are delivered with attitude, dark electro at it's best, Musically and vocally this track delivers, the piano in the middle 8 was an unexpected treat, mixed in beautifully with the dark synth sounds.

"Walking On Knives" is a short instrumental piece akin to what Depeche Mode have done on some album releases. This fitted in really well with the concept of the album. "Neo Rom Com" is a full on in your face electronic track, glam guitar and throbbing bass dominate this track. The fusion of synths and Simons vocals work really well, one of our favourite tracks on the album. "Protect And Survive" is a track that has been featured on our shows and is very upbeat, four to the floor rhythm punctuated with synth stabs, the song boasts a great chorus with blended vocals by both Simon and Rebecca. It's a track that shows the "Lighter" side of Future Perfect. "A.D.S.R" is another short interlude track that makes good use of vocal effects. The tracks leads into "Spaces" which is another fine electro pop track, Rebecca takes the lead vocal on this one, it's a fantastic track with a very strong chorus, great lyrics on this track, this is probably the one track that is a throwback to their album "Escape". The final track is "Excess", this is a song that draws on the influence of both Gary Numan and Depeche Mode, definitely has a much harder edge than the other songs on the album, didn't know what to make of this track initially but after a few listens it does grow on you.

The album does come with 4 bonus tracks, Destination have remixed "Neo Rom Com" and "(After The) Fall" both of which have been given the Destination "Synthpop" treatment and are both fine remixes. "Priest Of Excess" is a remix of "Excess" by Immune System, it's more stripped down than the original version but it is a superb remix. The last of the bonus tracks is the instrumental version of "Fall" which highlights just how good this track is musically.

This is an album that demonstrates that they have expanded their sound palette and have produced a collection of songs that are energetic and moody. This really is an impressive 3rd album.

The album is available on CD via Conzoom Records:

It is also available via Bandcamp:

Future Perfect - After The Fall (Bandcamp)
Posted by White Lion Radio Podcasts at 12:23