It is with great pleasure that we announce the debut album release by UK electronic music artist KRAFTman. He has recorded his own version of Kraftwerk's "The Man Machine" album. 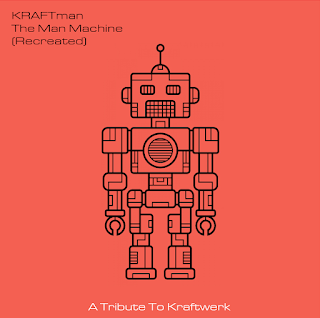 Kraftwerk first caught my attention in 1975, with their single "Autobahn", I remember thinking that it was like music recorded from another planet, unique and completely different from anything else that was in the charts at the time.

It would be another 4 years before I truly discover Kraftwerk, a track called "Neon Lights" was featured on an interview, on Radio 1, in 1979 that Simon Bates did with Gary Numan, it blew me away, so much so, I bought "The Man Machine" album the next day!

Never in my wildest dreams did I think I would be recording my own version of "The Man Machine", over 40 years later!

To make it more unique, a lot of the songs are my own arrangements and in addition to the 6 tracks that are featured on the album, I have also recorded all my own extended arrangements of all 6 songs, so if you love those 80s style 12 inch singles you will be delighted :)

I hope you enjoy what I have created.

The album is available as a Digital Download now via Bandcamp:

A video is also available for the first single that was released in support of the album, a 7 Inch Single version of "The Robots", you can watch the video here:

The 3 track single, which features "The Robots", a 7 Inch Single Version of "Metropolis" and a new 12 Inch Re-Programmed version of "The Robots", is also available via Bandcamp:

A further single will be released soon :)