Modus Operandi are messrs Olivetti and Marakas and they are set to release a brilliant concept album called "Space Exploration", they tell us the story of space travel through 12 new compositions. 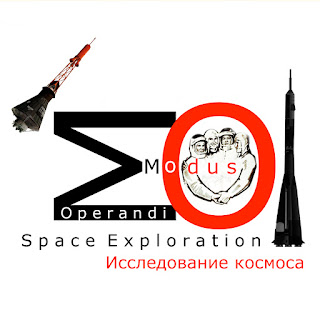 The first segment features 3 compositions, the opening "Van Allen Radiation Belt" is very atmospheric and through voice samples, which are truly fantastic, they introduce us to space exploration. What is the "Van Allen Radiation Belt", well, a Van Allen radiation belt is a zone of energetic charged particles, most of which originate from the solar wind, that are captured by and held around a planet by that planet's magnetic field. Earth has two such belts and sometimes others may be temporarily created. It was discovered in 1958 by James Van Allen.

The second segment features the title track "Space Exploration", which is quite an upbeat track, nice sequencer patterns and I really like the melodic touches, again, brilliant use of voice samples, think Metroland, a band from Belguim, to get an idea how this track sounds. Very impressive track, with plenty of depth to it. Completing the opening trilogy we have "Venusian Atmosphear", which deals with the atmospheric conditions on the planet Venus, the temperature and pressure on the surface of Venus are so extreme that none of the armored Russian spacecraft of the Venera series lasted more than an hour on the surface.

A bit of history and a review, what more could you ask for!

As for the track, it has drone sounds and atmospheric pads, very Sci-Fi, Similar to the opening track.
"Geosychronous Orbit" is very "Kraftwerk", superb use of voice samples again, over a slow paced electronic ensemble, wonderful pads and bass sounds with minimal rhythm, quite brilliant how they get their music so atmospheric, which of coutse, is perfect for the subject matter.

Next we have a 3 track segment again, "Corona", "Solar Flares" and "Surfing The Solar Winds", strange synth sounds open "Corona" before we enter dance beat terrortory, I love the synth sounds used on this track, one of my favourite tracks on the album.

Education alert! A corona is an aura of plasma that surrounds the Sun and other stars. "Solar Flares" is more of an atmospheric/ambient segment on the album, more of an interlude, lots of strange noises and sounds. For those that don't know, a solar flare is a sudden flash of increased brightness on the Sun, usually observed near its surface and in close proximity to a sunspot group. "Surfing The Solar Winds", reminded me of the work of Jean Michel Jarre, fabulous use of sounds, has a chillout vibe, another track I really like.

"Comets Tail To Plutos Head", is a short track that has some weird and unusual sounds and I do like the bell type sound used over the top, as the melody in the piece.

"Valentina" is a song about Valentina Vladimirovna Tereshkova, a former cosmonaut. She was the first and youngest woman to have flown in space with a solo mission on the Vostok 6 on 16 June 1963. It has to be said this song does her justice, we have a female vocal, by singer Linnea, along with sound samples, a very upbeat and jolly track, superb melodic parts, a musical romp with a russian flavour, best track on the album, love it and Linnea's vocal adds the icing no the cake.

The album closes with the tracks "Navigating The Asteroid Belt" and "Radio Waves", the former is very Kraftwerk (3D recording of the album "Radio Activity"), Mid paced with devine synth elements, probably the most Kraftwerk influenced track on the album, beautiful instrumentation. What is the Asteroid Belt?? It is a region of space between the orbits of Mars and Jupiter where most of the asteroids in our Solar System are found orbiting the Sun.

"Radio Waves" has vocoder vocals and utilizes the instrumentaion of "Navigating The Asteroid Belt", with elemnts added to it, a fitting end to the album.

A very impressive concept album and they have tackled the subject of Space Exploation in a very unique and original way, the music makes you feel like you are in space, I have listened with headphones at night with no lights on and it was stunning to listen too. Try it you won't be disapponted.

The album is due out this autumn and will be available on the bands Bandcamp page: