A warm welcome, to, "The Beginning Of Something Wonderful - The Story Of Empathy Test" 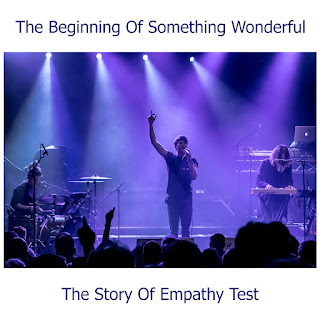 Empathy Test are an Electronic band based in the UK and on this audio documentary we take an indepth look at their career and releases so far.

The band consisting of Isaac Howlett and Adam Relf formed the band in January 2013 and have so far released several EP's and two debut albums "Losing Touch" and "Safe From Harm", which they released at the end of 2017.

They have been impressing on the live circuit as well, where the band are joined my Chrisy Lopez (Live Drums) and Sam Winter-Quick (Live Keyboards). In the last 12 months they have played licve in Poland, Canada, Germany, Sweden and elsewhere across Europe and in 2019 they are to play live in America.

If you haven't discovered Empathy Test yet, then this is the place to start!

Listen to the show on Mixcloud here or on Hearthis.at here

NOTE IF YOU ARE BASED IN THE STATES PLEASE LISTEN ON HEARTHIS.AT AS MIXCLOUD ONLY ALLOW 4 TRACKS FROM A SINGLE ARTIST IN A SHOW.

THIS ONLY APPLIES TO LISTENERS IN AMERICA.

All It Takes
Losing Touch
Throwing Stones (Minuit Machine Remix)
Seeing Stars
By My Side (New Portals Remix)
Bare My Soul
Everything Will Work Out
Here Is The Place
Trampoline
Incubation Song
Throwing Stones
Posted by White Lion Radio Podcasts at 02:59