Swedish Synthpop duo Eurotix return with their second album "Deux", the follow-up to the brilliant "The Secret". 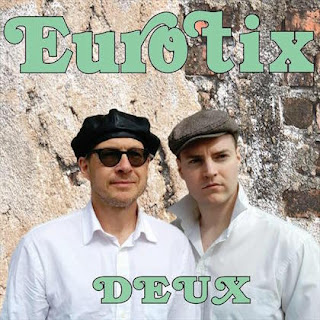 Larry and Dennis have expanded their sonic pallette on the new album, whilst retaining those melodic hooks that are their trademark and they once again make good their statement that they put the "Pop" back into "Synthpop". "Hello Susie" opens the album and as you would expect is a full on melodic romp, perfect pop and definitely single material. "Our Spaceboy", again doesn't disappoint, quite close to the sound of tracks on their debut album this one. "Don't Trust The DJ" is a much harder electro track with an impressive punchy bassline. "Only For Love" is the first ballad on the album and sees Dennis on fine vocal form, a heart wrenching song, beautifully executed. "Will You Remember Me?" is a fantastic italo disco track and a definite highlight on this album, following that we have the recent single "Kiss Them For Me", a brilliantly written song about Charles and Diana, search out the bands video for this track if you haven't seen it, it is hilarious.

Track 7 is outstanding, it takes it's blueprint from the Ultravox track "Mr X" (One of WLR's Favourite Ultravox tracks), with it's chugging bassline and erie sound, fast becomming one of our favourite tracks off the album. They clearly show that they are more than capable of writing songs outside their comfort zone. "Su Su Superman" is the one weak track on the album, it seems out of place when you listen to the other tracks, I suspect they just wanted to make a fun song with no boundaries with this one. Dennis is the master at singing electronic ballads and my word, on "The Innocent Years" he has raised the bar, the combination of Larry's music and his vocals make this one of the best Eurotix tracks recorded to date. "One Step Forward" definitely has a few influences, New Order, Shannon and Freeeze amongst them, a great 80s Hip-Hop tinged track. Next we have "Stun-Gun Set To Her Face" a synthpop track done club style, it's banging and brilliant, great chorus, which would be heaven in a "Eurovision" environment, synth pitch bends, it has everything!! And so to the closing track, the 6 minute epic that is "The Best Of Times", with it's medium paced italo disco backing track this is as good as it gets, a beautifully written and executed song, it has your emotions running everywhere, it's easy to see why this has become an instant fan favourite and that includes us, it is perfection.

I can't say how impressed we are with this band, they work really hard and the emphasis is always on recording top quality synthpop songs, something they consistantly do with every release.

Gentlemen take a bow, because this is an outstanding album, you haved raised the bar again......and to think "Are You Strong Enough?" isn't included!

The album is currently available as a Digital Download (A CD Edition is planned) via the following: